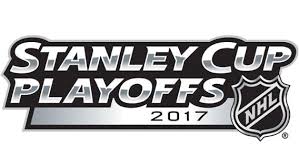 Every year, I go through this exercise in futility, putting my vast hockey knowledge to the test just to prove I'm as worthless at predicting the outcome of the NHL playoffs as the pundits on TV. For the record, I usually predict at a 60-70% clip, which makes me better than they are...

Here's what the playoff picture actually looks like this year:

I thought the Leafs, being the Leafs, would not even make the playoffs, but it seems as though Auston Matthews is "the real thing". However, the Caps have the best goalie in the world in Braden Holtby, the best goal-scorer of his generation in Alex Ovechkin, the deepest core of forwards in the East and a coach, Barry Trotz, who knows what he's doing and has instilled a system good enough for two straight Presidents Trophies, i.e. "tops in the regular season". The Caps being the best, plus "fuck the Leafs" make for a short series in my mind.

I didn't think the Pens would make the playoffs last year, let alone win the Cup. They may be balanced enough to repeat, but they first need to get out of their division, and that includes getting past the Jackets, who are making a case to become their fiercest rivals, to the displeasure of the Philadelphia Flyers. Look for this one to go all the way to seven games, and look for Brandon Dubinsky to get Sidney Crosby off his game at least twice.

The Habs finished first in the Atlantic - as was expected - but still had fewer points than the Rags, who finished in the first Wild Card position and, thus, avoided playing the Caps. I want to say good things about the Rangers, how they have the most consistent goalie of the past decade in Henrik Lundqvist, how well-balanced their offense is, but their defense is laughable and they never seem to be able to beat the Habs when Carey Price is playing. Honestly, I'm not Price's biggest fan, but if he only played the Rangers and Boston Bruins, he'd set the league record for shutouts and be the best goalie of all time.

The Sens may have won the season series 4-0 and the Bruins may be decimated by injuries on defense, but this will be a close one. Skill versus Grit always makes for a tight showdown, particularly in postseason play, when the referees stop making penalty calls and players like Brad Marchand and Zdeno Chara can punish their opponents without mercy. Tuukka Rask had a redemption season, but never sleep on Craig Anderson in the playoffs. The difference will be health and coaching, and Guy Boucher has Bruce Cassidy beat.

This could be the year the Blues finally make it... but realistically, no. The Wild are perhaps the deepest team in the league, without a true superstar at any position but with players who can play at that level for a while, starting with Devan Dubnyk in net, Ryan Suter and Jared Spurgeon on defense and an offense that includes names like Mikko Koivu, Jason Pominville, Charlie Coyle, Eric Staal, Zach Parise, Mikael Granlund, Nino Niederreiter, Jason Zucker, Eric Haula and Chris Stewart. The Blues counter that with Jake Allen in net, Alex Pietrangelo and Jay Bouwmeester on defense, and pretty much Vladimir Tarasenko up front, seeing as Paul Stastny seems to be injured. Oh, and the guy behind the Blues' bench is Mike Yeo, whom the Wild fired just last year.

This could be the one where we see a major upset. The Hawks finished first in the Western Conference after a late-season collapse by the Wild, and the Preds have been looking for their game pretty much all year, trying to fit in new arrival and star defenseman P.K. Subban in their system. Well, they have, and the only question mark they have left is whether Pekka Rinne can get back to the days when he was a Vezina Trophy runner-up instead of an overpaid underachiever. Now, I don't know if he can sustain it for two month, but two weeks? Absolutely. They're a bit of a long-shot, but they're worth the gamble.

They may have gone to the Stanley Cup Final last year, but the Sharks are old, injured (notably Joe Thornton and Logan Couture), and head coach Peter DeBoer usually has trouble repeating after some team success. And now they're all tasked with stopping Connor McDavid in seven straight games over two weeks? Not a chance.

If you'd asked me which Western Conference team was the deepest at the beginning of the year, chances are I would have said the Ducks. And I did. I love the Flames to no end, but they don't stand a chance, particularly with having not won a single game in Anaheim in something like 11 years. I would have loved a Battle Of Alberta to close off the Pacific Division series, but it just won't happen. The Ducks are bound for the Conference Finals, at least.