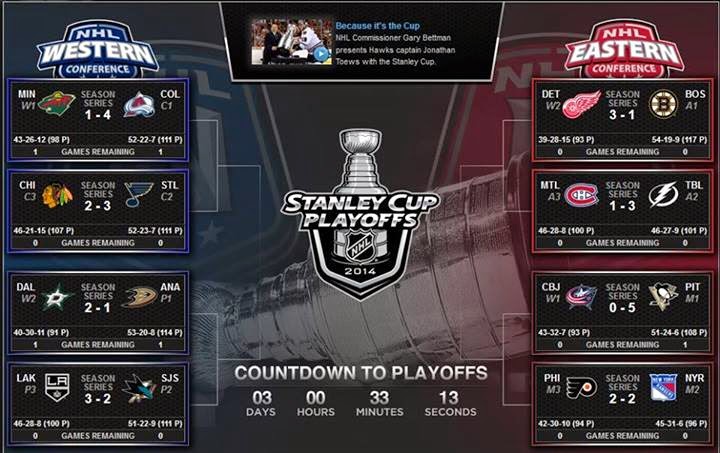 It's that time again: SPRING. And when hockey matters.

Patrick Roy has pretty much proved he's a heck of a motivator, and a pretty good tactician. He's got way too much firepower up-front to worry about Minnesota's decent defense, and goaltending will end up being the biggest differential, where Semyon Varlamov is better than all 4 potential goalies the Wild can throw at Colorado. It will be tight and well-fought, but the Avs will prevail.

The team everyone predicted would win this year plays last year's Champs... Chicago's too balanced and too good to let the injury-riddled Blues get the best of them, and St. Louis has to pay for messing up their core at the trade deadline by trading 4-year starter and playoff Messiah Jaroslav Halak for Ryan Miller, who hasn't been the same since surrendering the goal that gave Team Canada the gold medal in 2010.

Perhaps a few years down the line, Dallas' dynamic duo (Jamie Benn and Tyler Seguin) will rival Anaheim's (Corey Perry and Ryan Getzlaf). Also, the Ducks have three goalies who are just as good as the Stars' Kari Lehtonen, and there's something romantic about Teemu Selanne winning the Cup in perhaps his final season, especially if it means Saku Koivu also gets one.

I think it's even in the Old Testament that the Sharks aren't allowed to ever win a Cup. Plus, Darryl Sutter's Kings won it just two years ago with pretty much exactly the same team, with hard-working captain Dustin Brown, superstar center Anze Kopitar, and one of the two three best goalies in the world, Jonathan Quick. Oh, and the best defenseman this year in Drew Doughty. Sure, the teams are so tightly matched that all games may end up in overtime, whether it's 4 or 7 of them, but the Kings have to prevail, the future of mankind depends on it.

It's impossible not to root for the injury-riddled Wings (unless you're a Bruins fan, I guess). But no matter the offensive talent and heart the Wings can throw at the Bs, Tuukka Rask is just too good a goalie (another one of the top-3, in my opinion), and Boston has three full lines of forwards who can light up the lamp. Their defense is their weakest point, and that's considering Norris candidate (and past winner) Zdeno Chara can be a little slow and can't take hits as well as he dishes them out.

Ok, so can we all agree that Carey Price and springtime hockey don't mix? Still, the Lightning without my choice for Vezina winner (ahead of Rask and San Jose's Antti Niemi) Ben Bishop will be missing too big a piece to go without him for longer than two games. They'll score 4 goals per game, but they'll win 4-3 three times, and lose 5-4 four times.

You always need an upset, and Pittsburgh needs a reason to ditch coach Dan Bylsma. And Sidney Crosby needs to keep on choking*. The Jackets have the reigning Vezina winner in Sergei Bobrovsky, a rising star in Ryan Johansson, and they play a hard, mean-yet-legal game. If their uniforms weren't dark blue with so many stars and they weren't from a shithole like Columbus, chances are I'd really like this team.

I wrote on my Facebook page that this one would end in 7, and the final game would go into a week-long overtime - and the winner would be the team with one surviving forward to score. I was only half-kidding. I tend to want to favor the Rangers because of Henrik Lundqvist - the other member of the top-3 World-Class goalies - and two past Cup winners in Martin St-Louis (also a two-time Art Ross winner) and Brad Richards (also a Conn Smythe winner). But their Cup with Tampa was a decade ago, and Claude Giroux's time is now. Still, the Rangers' depth on defense will overpower's Philly's shallow blue line, particularly on the strength of Ryan McDonaugh. It wouldn't be so close if these two teams weren't such intense rivals.

*figuratively speaking, of course; Crosby is a choker in the sense that he's often said to be the ''best on the world'', yet ''only'' has one Stanley Cup to show for it. Alexander Ovechkin has double his hardware, and teammate Evgeni Malkin has the same amount, including the elusive Conn Smythe; also, Crosby has won two Olympic gold medals and was never named to the tournament's All-Star team. So, best in the world? Hardly even a top-5, in my opinion.
Posted by Sébastian Hell at 11:27 PM