Well, I got both wrong in the Conference Finals (Round 3), which brings me closer to the average Joe's average... so I figured I wouldn't stop there. 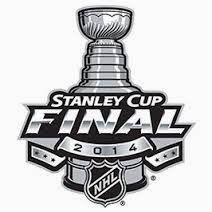 Henrik Lundqvist and Ryan McDonagh look like the MVP candidates on the Rangers' side, but the Kings - believe it or not - have the best offense in the whole post-season, and the most-clutch goalie in the world in Jonathan Quick, though he hasn't exactly been consistent this year. However, he has staved off countless elimination games (4 against the San Jose Sharks alone), so never count him out as a factor in a win. Even after letting in 3 goals in the first period, you will remember all of his later saves as ''big ones'' when his team wins 4-3.

Then remember the Kings also have Drew Doughty - the best defenseman in the sport? - for half the game playing in front of him, and that they have a line with both Marian Gaborik and Anze Kopitar. And another one with Playoff Hero (Clutchin') Justin Williams and captain Dustin Brown. And Jeff Carter, and the luxury of having Mike Richards on the third line.

And Darryl Sutter to coach - no offense to Alain Vigneault, who has now reached the Finals for the second time in 4 years (both times with teams in blue and white), but Sutter won in his first try, with a team full of character players, most of whom are still around from two seasons ago. Meaning they have matured, but not necessarily aged.