NHL Playoff Predictions: Round One

Many of my regular-season predictions were pretty spot-on (5 guys score 25, Alex Ovechkin returns to form and leads his team to the #3 spot in the East, Ottawa's goalies work miracles, Pittsburgh leading the East, New Jersey missing the playoffs, Patrick Kane at 20-plus goals, Doug Weight ends up coaching the Islanders), but some missed the mark. Now's the time to try my hand at predicting the playoffs... 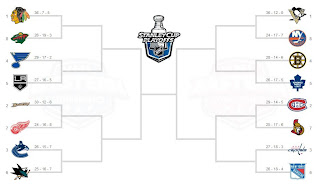 Western Conference:
Chicago Blackhawks vs Minnesota Wild:
The Wild overspent on default first-liners this summer and found themselves struggling all season long to compensate for their lack of depth. Their goaltending isn't what it once was, but the addition of former Buffalo Sabres captain Jason Pominville will help a lot. But I don't see the Wild contending for another two years, while the Hawks have proven to be virtually unbeatable all season long.

St. Louis Blues vs Los Angeles Kings:
The Kings are pretty much intact from their Stanley Cup-winning team of 12 months ago; the Blues are down to back-up Brian Elliott (and we know how that went last year), and they have failed to score against playoff-bound teams in the past month.

Anaheim Ducks vs Detroit Red Wings:
Both teams are playoff-proven and filled with veteran experience and youthful energy. The Wings still have a Conn Smythe winner on their team, though, in Henrik Zetterberg, and they have the better goalie in Jimmy Howard.

This one goes to 7 games and can go either way. I'll give it to the Ducks, for Saku Koivu.

Vancouver Canucks vs San Jose Sharks:
Time is running out on the Canucks, as they are getting up there in age and, should they not win soon, contractual obligations alone will force this time to be blown up. Still, they have a potent mix of top-tier talent (the Sedins), a strong defense, good goaltending, and gritty, clutch guys (Ryan Kessler, Alexandre Burrows, Maxim Lapierre). Time ran out on Joe Thornton, Patrick Marleau and the rest of the Sharks a few years ago, although Antti Niemi was one of the best goalies this year - but that won't be enough.

Eastern Conference:
Pittsburgh Penguins vs New York Islanders:
You need one sweep, and this one's the no-brainer. Sidney Crosby can take all the time he wants to recover, the Isles are no match for even the  Pens' third line. Heck, even Evgeni Malkin can stay home for this one, super sniper James Neal and the best captain team player in the game (Jarome Iginla) can take it from here.

Montréal Canadiens vs Ottawa Senators:
I love the Sens, they're my second favourite team in the East. I love their goalies, I think Jason Spezza is the best set-up man not named Crosby, I love Erik Karlsson and Milan Michalek, and I have a soft spot for Guillaume Latendresse. I have doubts about Carey Price. But the Habs are just way too strong for the Sens. Their three rookies are even key pieces of the team, proof that the coaching staff know exactly how to run their guys.

Boston Bruins vs Toronto Maple Leafs:
Both teams play a hard-nosed game, but the Bruins' third line can match up against the Leafs' first. And sure, James Reimer had a fine year, but Tuuka Rask is already among the league's top-10. Consider this: the Bruins can afford to leave Milan Lucic in the stands as a healthy scratch once in a while... and they're one or two guys removed from still having their 2011 Cup team on the ice every night. Oh, and Jaromir Jagr's still got it. The winner comes out banged and bruised, which could cost them in later rounds.

Washington Capitals vs New York Rangers:
The Pens notwithstanding, these two teams are, on paper, the best offenses in the East. Henrik Lundqvist is the best goalie in the world, and the Rangers have the best defense corps in the league, but Brad Richards is having an off year, as many other Rangers attackers are. And say what you will about Ovechkin come playoff time, he's got 59 points in 51 playoff games, and he's got two master passers able to feed him this time in Mike Ribeiro and Niklas Backstrom. This one's a toss-up, and the winner could go to the Conference Finals...