I had three four events I could have gone to - happily - on Friday night, but physics and cash would force me to attend just one, and it was to be Reversing Falls' album launch, at Casa del Popolo. It was organized by Indie Montreal, and had a decent $7 cover charge which, coupled with the city's best beer at $5 a pint and hosted in the best smallish-to-midsize venue in town made for a night full of promise. 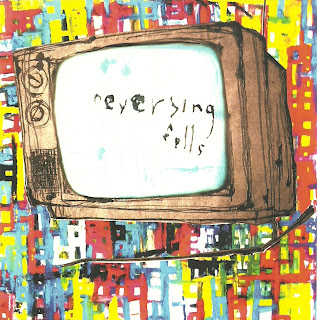 Unfortunately, promises - like New Year's Resolutions - are made to be broken, and they were pretty much shattered by the opening band, Holobody, a male-female duo who at times both sing, both play guitar, and doodle with knobs and pre-programmed instruments with all the energy of a comatose paraplegic. Their most-felt and least-bad song was a cover of Beyoncé's Crazy In Love that would make Lana Del Rey proud, but for all their potential - and they do have some talent - their set fell flatter than dry wall.

Then came Asthma Camp, which was 200% better - but still pretty bad. A three-piece consisting of a decent drummer, an energetic guitarist and a singer/keyboardist, their riffs could have used a lot more power (say: louder volume and distortion) to hide the fact that their white-boy reggae was lifting beats and melodies from all over the 1980s, from Laidback's Sunshine Reggae to Men At Work's Land Down Under, and even Madonna's La Isla Bonita. Indie cred: zero.

Luckily, Reversing Falls were in fine form, with a short-but-energetic, balls-out set - now with a live drummer! They covered Hole's Malibu, played songs from their first EP and even one from a limited-release Distroboto minidisc, as well as much of the new stuff, starting out with Curse This Place. From start to finish, they gradually, single-handedly upped the evening's grade from An F-minus to a solid B - it would have been even better with worthy openers, or had they been the lone performers.
Posted by Sébastian Hell at 2:31 PM