I was wrong on 3 counts in my First Round Predictions, but got the right games count on most - I was more than a game away just once. Here is my take on Round Two: 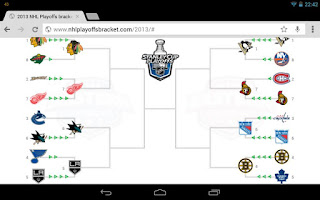 Pittsburgh Penguins vs Ottawa Senators:
The Sens have the reigning Norris trophy winner, the Pens have a nominee this year. Ottawa has the best playmaker in the league in Jason Spezza, Pittsburgh has the runner-up in Sidney Crosby, but they also have the best player in the world in past Conn Smythe winner Evgeni Malkin. The Senators have the guy I considered at the beginning of the season as the second-best captain in the league (in Daniel Alfredsson), but the Penguins acquired my top pick (Jarome Iginla) at the trade deadline. And while Ottawa has capable snipers in Milan Michalek and Guillaume Latendresse, they fall a bit short of Pittsburgh's James Neal. However, the Senators have the best goalie in the playoffs in Craig Anderson; no disrespect to Tomas Vokoun and Marc-André Fleury, but this season, they're not even close. It would take an All Star team to beat Anderson; Pittsburgh has that. Ottawa's sizeable defense just has to pound them as much as they did the Habs and the Sens can get it done, in time.

Boston Bruins vs New York Rangers:
Well, the Rangers' offense has awoken, to go with the best defense in the league and the best goalie in the world. Add one of the best motivational coaches in the league and you've got a potent mix. On the other hand, the team John Tortorella would dream of coaching - the best-balanced skill-and-toughness mix in recent memory - happens to be the team he's facing. This may be the best series this round, though they'll all be exciting.

This one goes to 7. Rangers win.

Chicago Blackhawks vs Detroit Red Wings:
I love the Wings. Their grown-sooner-than-expected defense, Jimmy Howard, Henrik Zetterberg, Pavel Datsyuk, Justin Abdelkader, Valtteri Filppula, Justin Tootoo. But The Hawks have much more depth. And youth. It won't be a fair fight.

San Jose Sharks vs Los Angeles Kings:
I don't make the rules, they're just there: The Sharks shall not win a Cup. And who better to knock them out than the reigning Cup champs? L.A. is the better team, with the better goalie, the better defense, the best offense, the best captain... but since emotions are high in this new Battle Of California, I think the Sharks could take a couple of games. Though I wouldn't be surprised to see the Kings sweep.