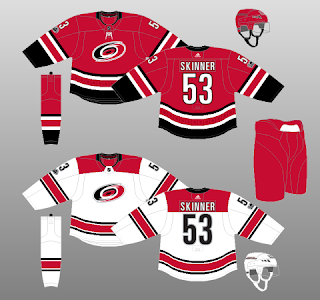 Must-improve forward: Jordan Staal was supposed to become an elite center, but it seems like his best years were when he was the Stanley Cup-contending Pittsburgh Penguins' third-line center...

Analysis:
Many pundits see the Carolina Hurricanes making a huge leap forward, some going so far as to predict they're finish ahead of at least two of the New York Rangers, New York Islanders and Philadelphia Flyers. At best, those people need to hold their horses, because their home uniforms might look like those from their Cup-winning days a bit, but the away ones are exactly like last year's garbs.

Yes, the Canes boast a terrific young group of defensemen, but one or two of them are going to have to be traded for Carolina to acquire the two pieces it requires to have an actual first line. Oh, and the Flyers have an even better D-corps and actually have a full top-six up front, the Isles have a strong top-4 on D and a captain who goes by the name John Tavares and the Rags, well, ok, they're on a down slope, but the logical step down from a 102-point season is a 96-point season, which is better than what the Hurricanes should expect to get.

Head coach Peters has not proven able to provide the team with a good enough system to withstand playoff-bound opposition with just about the same roster last year, and GM Francis has been collecting bit pieces and potential second-liners who'd failed from just about every corner of the NHL, but mostly from the Chicago Blackhawks. Trust me, Hawks GM Stan Bowman wasn't getting ripped off on every single one of those deals.

Darling's a better goalie than Lack or Ward at this point, but he has yet to prove he's a viable option as a #1, playing some 60-plus games a year.

Prediction: 7th in the Metropolitan Division, but possibly just 5 points shy of a playoff spot.
Posted by Sébastian Hell at 2:17 PM