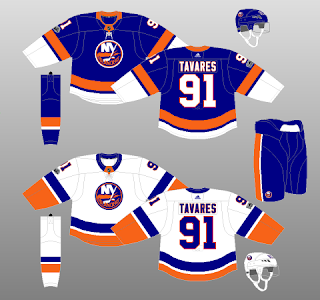 Must-improve forward: Ladd was awful for the first half of the season, taking forever to get adapted to his new team and puzzling head coach Jack Capuano along the way. Upon Capuano's firing, he hit his stride, which should continue this season as he takes on more of a leadership role with this young group.

Analysis:
Off-ice issues keep surfacing for the Isles, but GM Snow keeps finding ways to improve his roster every season through savvy trades (Leddy, Halak, Boychuk, Eberle) and sometimes even a decent free agent signing (Ladd, for example). He has also drafted well (Tavares, Beauvillier) and boldly (Ho-Sang), and whenever his draft picks do not pan out to his liking, he always finds a suitor in Edmonton who will take them (Strome, Griffin Reinhart) out of his hands.

He's not adverse to making season-impacting mistakes, though, as can be attested by the Bérubé situation last year that was mostly responsible for Halak spending half the season in the AHL, until he was needed to win all 7 of the Islanders' last 7 games - he won six of them, and Greiss surrendered too many goals in the other for Halak to save the day.

Still, when it comes to ranking GMs, he's in the top-5 for bang-for-your-buck trades and definitely #1 for entertainment value. He is never content to just sit on his laurels and watch a season unfold without stamping it with his distinct signature.

That is why I see the Brooklyn-based team finishing with the top Wild Card spot in the East. Well, that and the roster he's assembled, led by Tavares and Halak in contract seasons.

Prediction: 4th in the Metropolitan Division, first Wild Card in the Eastern Conference.
Posted by Sébastian Hell at 5:34 PM