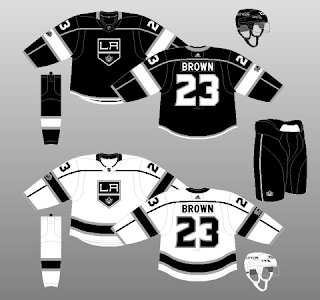 Must-improve forwards: Dustin Brown, the shell of a 24-28-goal scorer who last reached the 15-goal mark in 2013-14 and lost his captaincy along the way; Kopitar, who took on the "C", then signed a deal with a $10M cap hit and buckled under the pressure, going from being one of the best two-way forwards in the game to a checking forward in a single summer - a fate shared around the league by the likes of Jonathan Toews, Patrice Bergeron and Tomas Plekanec the very same year.

Analysis:
One thing I am not known for is hopeless optimism. I believe in patience and struggle, in working hard to get to where you want to go and striking out many times trying out the same thing more than once until the world catches up with my way - the right way - of thinking.

In essence, I should be the GM of an NHL team.

The Kings barely qualify as such. I believe the shake-up will have some positive effects, and I believe all of last season's under-achievers (chief among them Kopitar) will bounce back. Not enough to make the playoffs, mind you, but enough to contend for a spot until the last month of play, until they run out of gas for lack of depth on offense.

John Stevens will not be able to pull this off. As a matter of fact, the Kings' structure looks like it underwent a putsch, what with the assistant-GM taking over the GM's job and the associate coach - someone he was probably in constant contact with - taking over as head coach. Backstabbers don't make it for long in hockey - sports aren't politics.

Prediction: 5th in the Pacific Division.
Posted by Sébastian Hell at 12:32 AM