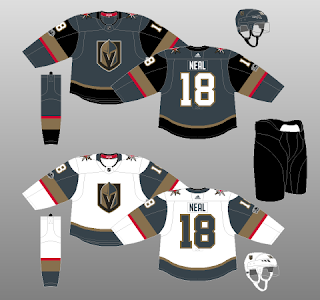 Arrivals: everyone on the roster is new.

Must-improve forward: Smith was extremely disappointing last year, but perhaps his former coach Gallant can light that spark back up - or at least get him going enough that he becomes trade bait for a decent haul at the trade deadline.

Analysis:
As is usually the case with expansion teams, the Golden Knights not only have one of the best goaltending tandems in the league, but both of their goalies are good enough to be starters - Fleury just got pushed out of a Stanley Cup-winning team by a younger guy although he carried the Pittsburgh Penguins for the first two rounds, and Pickard was just Colorado Avalanche GM Joe Sakic's latest costly mistake.

Vegas GM McPhee drafted a team that was good enough to challenge for the 9th or 10th place in the Western Conference, right outside the playoff picture, with one of the deepest groups on defense; he traded away the best components of that defense (Methot, one of the three best shut-down defensemen in the league, hard-hitting Emelin, third-pairing two-time Cup winner Van Riemsdyk) to make room for reclamation projects (and for late draft picks) and the team will fall down a few pegs from its best-case scenario.

Instead, Schmidt, Theodore and Brannstrom are good pieces to build around, Garrison is a solid veteran, but Sbisa no longer has a place in any respectable top-6, let alone a top-4.

The offense isn't as deep as other teams', but falling upon a former 40-goal scorer like Neal and a current 30-scorer liek Marchessault means they at least start with two legitimate first-line wingers. Signing Shipachyov (third in the KHL for points, fifth for goals last year) may have also been a stroke of genius, but he may require some time to adjust to the smaller North American rinks, so he may spend the first month on the third line or even in the AHL.

Then there's the 30-goal Marchessault, who likely will never hit that plateau again but will at least be given a legitimate chance to with top-line minutes; there's also should-have-been-a-30-goal-man Perron, who had found a home on the St. Louis Blues' third line, the Dallas Stars' third-line 40-point man Eakin and former top prospects Haula, Pulkkinen, Karlsson and Smith, so the potential to see one of them develop under Gallant exists, at least.

Also, those uniforms have definitely grown on me. I love them.

Prediction: 7th in the Pacific Division, ahead of the Vancouver Canucks for good measure.
Posted by Sébastian Hell at 5:34 PM