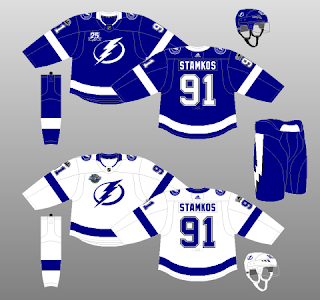 Must-improve forwards: Kunitz is at best old, at worst over the hill, so I wouldn't put too much stock in him posting record-shattering numbers, but his experience (three Stanley Cup rings) might come in handy in the postseason. Callahan has not only become extremely fragile, but he's also slowed down in just about every way possible. Johnson needs to post better regular-season numbers to be worth his cap hit.

Analysis:
Just when you're ready to crown Yzerman as the NHL's best GM, signing the likes of Stamkos, Kucherov, Hedman and most of the core to team-friendly cap hits (the Florida state tax exemption might have something to do with that as well) and managing his expansion draft protection list so well that he got the best defenseman not currently in the NHL for a guy he might have lost for nothing, he goes and signs Kunitz and Girardi for too much money. At least Kunitz brings intangibles, but Girardi just brings you ten minutes per game of being stuck in your own end and accrued fatigue on the rest of the defenders to make up for essentially being shorthanded when he's on the ice.

Still, Vasilevskiy is now the Big Man On Campus between the pipes, and he should run away with it and be very good most of the time. With a defense that includes Hedman and Sergachev and one of the best offenses in the East, the Bolts should have no trouble taking the division title this year, by a long shot.

Look for Jon Cooper to win the Jack Adams Trophy ("Coach Of The Year") along with the division title, meaning he will likely lose his job in early 2019 if recent winners (Bob Hartley, Patrick Roy, Paul MacLean, Dan Bylsma) are any indication.

Prediction: 1st in the Atlantic Division.
Posted by Sébastian Hell at 5:32 PM