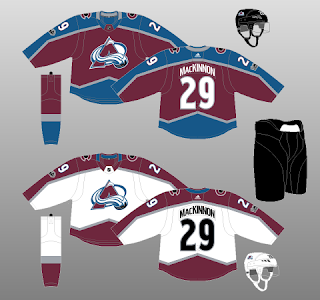 Must-improve forward: Yakupov is nearing overstaying his welcome. If it doesn't work out on the Avs - both because of their high-end skill on offense but also because it will be his third strike after failing with the Edmonton Oilers and St. Louis Blues - he will only have the Montréal Canadiens to turn to, seeing as he had decent chemistry with Alex Galchenyuk in Juniors... provided the Habs even give him a shot. They've been saying "no" to Jaromir Jagr for the past decade, so I'm not sure why they'd try Yakupov instead...

Analysis:
How did the worst defense in the league elect to play out the offseason? By getting rid of two NHL-level defensemen and coming into training camp with just two top-4 defenders signed to a game-ready contract, one of whom is oft-injured Erik Johnson. Last year's second in defensemen points, Beauchemin, was bought out yet will resume playing with the Stanley Cup-contending Anaheim Ducks.

The Duchene saga has been dragging on for far too long; he's one of the reasons why head coach Patrick Roy departed ahead of last season, and Sakic has been unable to deal him because, quite simply, he comes with way too much baggage, with guys like Roy, Iginla, Jean-Sébastien Giguère and Paul Stastny publicly calling him out, and his siding with Ryan O'Reilly during his own struggles with the organization. Oh, and he hasn't even tried to be half as good as he can be since Roy called him out for celebrating his 30th goal of the season in a 5-1 loss 18 months ago.

Simply put, the Avs are a shit show, and Sakic is the main reason why; he was a great player - my favourite skater and captain, actually - but he has proven incapable of addressing his team's most glaring issues (defense and lack of leadership, two issues Roy asked to have fixed), lost his best goalie (Pickard) to the Vegas Golden Knights, and has let his once-dominating team become the league's laughingstock. I realize Greg Sherman left him with a few holes to plug, but diving this deep in the abyss is solely on him. He has to go.

Oh, and Bednar had better show up to training camp with a good defensive system to enable his team to lose 1-0 or 2-1 twice a week and try to win 2-1 on weekends, or else his career behind an NHL bench will end up as an assistant-coach at best.

Prediction: Once more, last-place overall. Only this year, that's 31st, not 30th.
Posted by Sébastian Hell at 5:26 PM