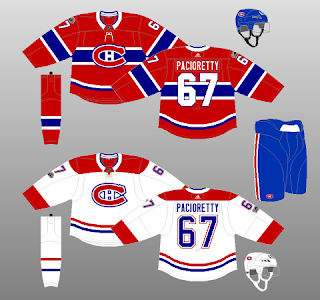 Must-improve forwards: Plekanec should bounce back from his lone bad season ever. Galchenyuk needs to find his game again; perhaps if we kept some of his friends around instead of trading away all of his drinking buddies and/or mentors...

Analysis:
How do you dismantle a first-place team? Start by trading two Norris-level defensemen (P.K. Subban and Sergachev) in a 12-month span, then ask another one (Markov) to leave, and follow that with overpaying the overrated goalie, which will be effective next year, leaving the GM handcuffed by the salary cap and with the lower hand in any conversation with any of his peers.

Then make sure to take the confidence away from your 30-goal first-line center by telling him he's not good enough to play that position, then proceed to trade for a guy with the exact same skill-set and who has never played center in the NHL, then announce he will be the new #1 center, meaning the team is now without either a true #1 or #2 center.

Make your captain the guy who has never made a difference in the postseason (or with his national team), in nine NHL seasons. (To be fair, the Habs only made the playoffs four times in that span, where he has accumulated 19 points in 38 games. He'll probably also double in salary next year, knowing GM Bergeron...)

Oh, and have your #1D be an old, slow guy who is slowing down. And have your #2D play the same side as him, then make sure to have six guys suited for a #6D role, and slot three of those higher than they should be.

How about hiring the wrong coach for your type of players? Yep, check on that as well, give a guy who likes to coach heavy, mean, dirty players a bunch of small, skinny playmakers.

This team is doomed for the foreseeable future, because even if the owner gets rid of the GM, the head coach is signed at a high price for the next five seasons, the salary cap situation is a mess and the holes in the lineup are becoming too big to plug with C-level trades, the waiver wire and low-risk free agent signings.

Prediction: 4th in the Atlantic Division, out of the playoff picture because they will fail to be the Second Wild Card.
Posted by Sébastian Hell at 5:31 PM