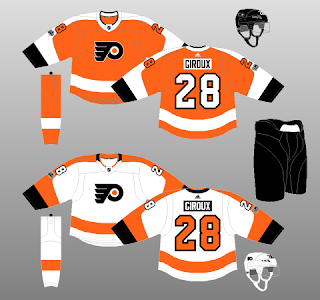 Must-improve forwards: Giroux's stats have been trending downwards for four straight seasons now; this is "do-or-die" for the captain, because if he doesn't get close to 60 points and/or the top-25 in the league, he may get bought out. Voracek's numbers have also been down since he signed his monster deal two summers ago, and he was -24 last year to boot.

Analysis:
Had the Flyers been in the Atlantic or the Pacific divisions, perhaps they would have made the playoffs this year. As it stands, though, in a division with at least three 100-pont teams, they will be right outside the postseason picture.

This may be Hakstoll's final chance behind the Philadelphia bench, partly because he has not shown to be a good enough tactician for the NHL, but mostly because Hextall's rebuild is basically MacDonald's contract away from being complete and he will be expecting results - particularly with Lombardi on board.

It now looks like Couturier might never become the ideal 60-point 2C he was seen as both when he was drafted and when he signed his extension, but the thing is he no longer needs to be, as Patrick will be able to take over for Giroux in two seasons and they can switch their ice time accordingly while Couturier plays a shut-down role on the third line.

Hextall's slow inclusion of his blue-chip blue-liners means he won't necessarily have to pay them all elite money at the same time, some opting for long-term team-friendly contracts in exchange for NHL security, meaning the Flyers could have one of the five best top-4s in the league for close to a decade.

This team is on the verge of greatness, particularly if Stolarz is ready for the #1 gig in two years' time.

Prediction: 6th in the Metropolitan Division, a win away from a Wild Card spot.
Posted by Sébastian Hell at 5:32 PM