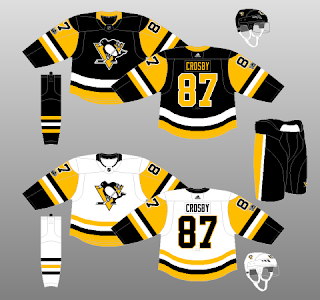 Analysis:
Mike Sullivan is either a magician or a genius, because he took the joke of the 2015-16 playoffs ("How can the Pens win the Cup with just ONE NHL defenseman in Letang?") and doubled down on no-names when Letang couldn't even dress for a single playoff game. And won a second-consecutive Cup, getting outplayed and boxed in their own zone in 90% of the games.

How "no-name" were they? Four of them left this summer, and Pittsburgh is still likely the top team in the East, ahead of the Tampa Bay Lightning.

All of that is also a testament to GM Rutherford, whom you may remember as the guy who took the Hartford Whalers from near-obscurity and turned them into the even-more obscure Carolina Hurricanes, lucking out on a Stanley Cup in 2006 and failing to make the playoffs in just about every other season. He then inherited a cap-strapped, underachieving Penguins roster consisting of Crosby, Malkin, Fleury, Letang and 19 nobodies and made them the team to beat again by having each one of his acquisitions and call-ups become important cogs in the machine. Oh, and cash-strapped? Yeah, about that: he managed to add the $64M, eight-year Kessel contract to that roster. Magician or genius or lucky, or all of the above?

There is seemingly no end in sight for those two, who have defied expectations (and logic, and reason). Except for the fact that Letang and Malkin tend to miss a lot of games due to injuries, and that the next time Crosby gets hit hard anywhere or just softly on the head might spell the end of his career. And Murphy's Law being what it is, these things will all happen in the same season. But not before the Pens have a chance to three-peat, right?

Prediction: 1st in the Metropolitan Division.
Posted by Sébastian Hell at 10:44 AM